The Rosewood Center is a psychiatric hospital located in Owings Mills, Maryland.

After the state departments of health and mental hygiene merged in 1969, the facility was renamed the Rosewood Center. The antiquated facility has been threatened with closing in recent years.

The old and new facilities stand directly across a field from each other, the newer facility still active housing over half of the people with developmental disabilities who reside in Maryland's four state-run institutions. The old grounds have been known for ghost sightings and have been well traveled through. The main building was burnt in a 2006 case of arson and the site is now under security monitoring.

On January 15, 2008, the state of Maryland announced that Rosewood would close within 18 months

Established 1888, Owings Mills, MD** - Rosewood Center is a State residential Center that supports adults with mental retardation from the central Maryland region. It was removed from service in 2006 and is slowly being dismantled. 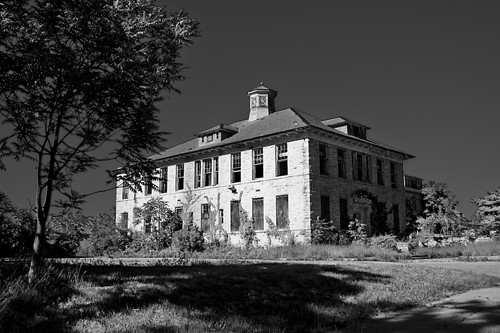 This is the way we found in. There were other open doors and windows nearer to groud level, but the stairs were calling our names, beckoning us in trance to arrive in a rising fashion to upper floors. I felt much less like a thief or trespasser going up some stairs and into an open door rather than climbing down and into a broken window at the base of the structure. 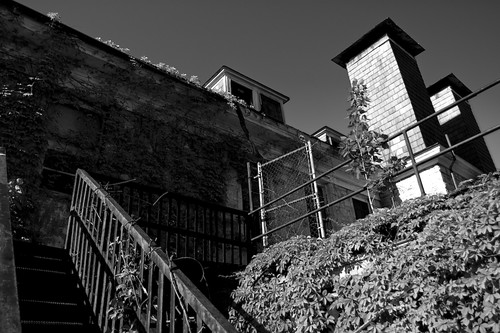 Anyone else reminded of Resident Evil? 18mm

The first room we entered after ascending the fire escape stairs gave me an instant and undeniable feeling that this place was a photo gold mine! So much more to come from this creepy and intriguing place. 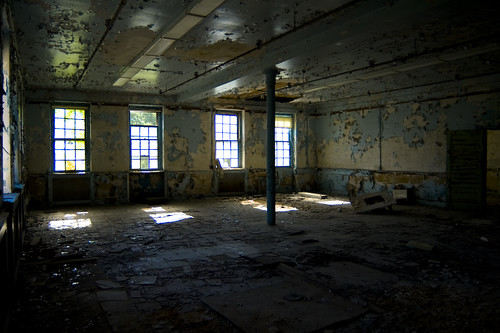 In Resident Evil, when you come upon a stairway that is blocked with debris, you eventually stumble upon a puzzle or clue as to how to clear the way to the next level or section of the game. I guess I still haven't found that yet....gotta keep looking. 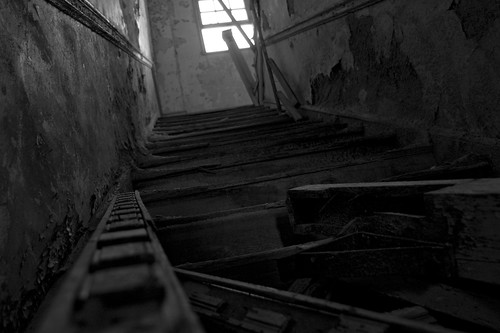 This stairway is located just outside of the First Room. Alternate title: Watch Your Step

Have a problem child? Squabbles and meltdowns are inevitable, so we have the perfect place for your little one to take a moment and chill. Adult sizes available at request. 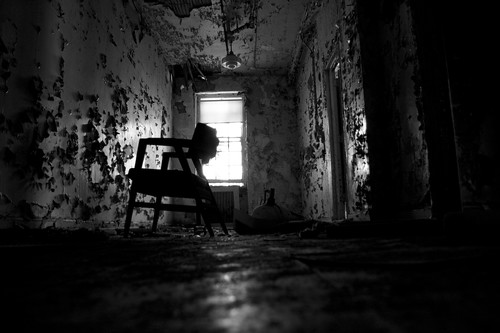 These colors are supposedly used in hospitals, clinics, and asylums to evoke a soothing, calming effect on patients. IMO, I find them disturbing and invigorating -- energizing to a point. Where is the research to support these claims?

Not that I'm refuting the research or disbelieving that it doesn't exist. I merely question the notion that I might feel as if I'm floating on my back in the middle of a lake, baking in the summer sun without a care in the world when surrounded by these shades.

Considering the nature, rumors, and history of this place, I'm not sure "soothing" and calming were effectively implemented. The colors of this place seem to instigate and tease, rather than brush you down into a pattern of tranquility. 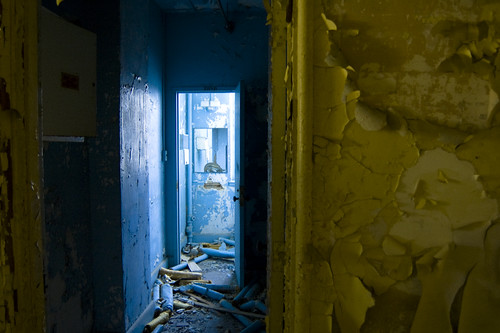 I was about to step into this room when I realized my foot wasn't sturdy on the wooden floor. In fact, it was sinking, inch by inch, as I applied more weight to my step. I looked down and saw that my foot was sinking into the floor. I swore if I stared at the rotting wood, I could see the fibers of the wood disappearing.

With this in mind, I politely removed my half-eaten appendage from the hungry floor and took a quiet step back. That's when I realized I was holding my breath -- so I let it escape to suck in as much fresh air as I could get from this musty place. Regarding this moment as lucky, I quickly took some snaps and moved on. 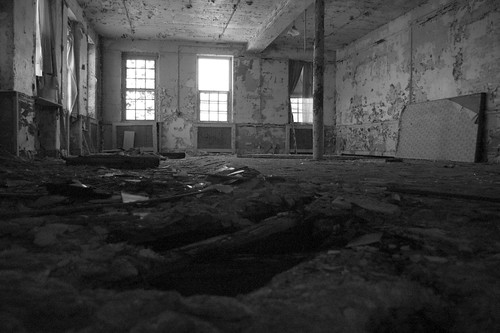 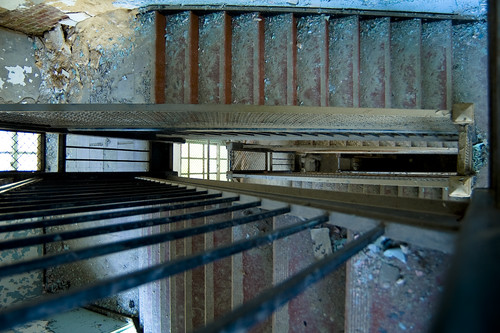 I went back to Rosewood yesterday, and after what I felt like afterward, I won't be returning for a while. I just felt...off. Something was definitely wrong, many people noticed and asked about it when they saw me.

I didn't experience anything, and neither did Justin who went with me. I just got to a point where I had to leave. Something told me, just go. It's time to leave. And after that, I didn't feel right the rest of the day.

I can't explain it. All I know is, I won't be going back there for a while. I have 500+ shots of the place so far that will keep me busy long enough to calm my nerves and muster up the courage to return. In the meantime, enjoy what I've gotten of this place so far. 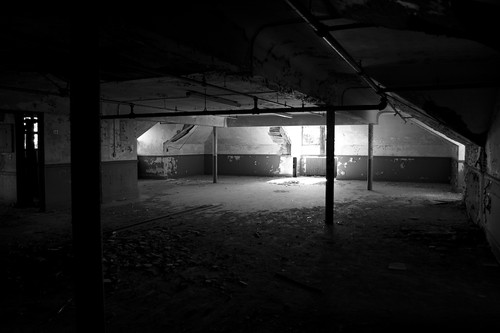 Replied
14 years ago
Updated
5 months ago

This is an excellent series of photos. Very nice job telling the story of the building with your camera.

I should add that the composition on these photos is outstanding. I wish I lived in an area with buildings like this. Phoenix is a very young city so we have very few old abandoned structures like this. I can't wait until I get to head back east again and shoot some stuff like this.

There is an old derelect hospital just outside Edinburgh that is ideal for taking shoots like this. However when anyone goes near it with a camera a security guard or the police will turn up and advise them to leave.

It's a shame to think the money spent on these buildings and the history they had seems to be left to rot and die like this.

Now you need to go back with a model and some quality lighting equipment. That would be an excellent shoot for a model. I can imagine so many cool shots you could get, especially in that room with he sun coming in the windows.

Thanks all! I've got so much more from this place -- coming soon! And I'm planning a 4th visit soon. 😉

Kinda creepy. Why is it there's always abandoned psychiatric facilities everywhere. There's in Oregon within a 100 miles of me.

These pictures are awesomely eerie. I love time out!

When you left, the feeling you had, was probably from the hospitals energy, being an institution, you can imagine what went on there when it was operational, and it is said, that building absorb the negative energy, of the people that once inhabited it. Very spooky. I am pretty sure, that is one thing which is believed in "feng shui".

Great pictures. I am in the process of researching family history and have found that my Grandfather was an "Inmate" in Rosewood (previously Maryland Asylum and Training School) in 1910. That is what brought me to this site. Do have any additional information or know where I can find more information on this facility in its early days?
Thank you