Hi guys,
is there any way to change IP address of computer from Command prompt.

There's no way to effectively change it from a command prompt. You could use the ipconfig release and renew commands, but chances are you're just going to get your old IP address back, especially if you are behind a router or static IP.

Why would you want to do this anyway out of curiosity? The answer might help you get better ideas.

Hi thanks for reply but changeing IP from command prompt was just a chanllange for me from my senior.

it is just 6th month for me in networking. but i had spend those 6 months like 3 years (around 16 hours a day)

anyway thanks for reply.

The NETSH command does this. This is its helpfile:

Works in a batch file too. I used to use this all the time but I lost all my batch files 😢 .

to set a static address or

to set it to DHCP. Its a great command to have a link to on the desktop if you frequently move between static & DHCP networks etc. I used to use it a lot when i was configuring firewalls and needed to quickly switch my machine between outside & inside subnets.

I see. That makes more sense now. Looks like DuckIT provided the answer.

I learned something new today! yay! 🙌

We are not going to help you get around craiglists website set-up. If you have an issue contact the admins over there and see if they would be willing to change the rule.

By the way, this is on the subject of changing your LAN ip. Your external IP is set by your ISP and you cannot change it. That is the IP craigslist is seeing.

I have used the netsh command menssioned before. I also provide the proper ip address, mask and gateway then also got the following message :

"The syntax supplied for this command is not valid. Check help for the correct syntax.

But when I used 'set address' command it work properly but the ip address doesn't changed.

Can any one help me to change ip address from command line. Thanks in advance.

Which IP are you trying to change? You can not change the IP given to you by your ISP. You are probably tring to set an IP on an adapter that has already received an address from DHCP - that won't work.

Let me know if you have question

To change DNS server addresses from cmd type next:

You can even add other DNS servers 🙂 from cmd.
To do this type next:

Your external IP is set by your ISP and you cannot change it. That is the IP craigslist is seeing.

You could actually use an ip changer service like iprivacytools to change your "external ip", which it does by routing your traffic so that your ip simply "appears" differently to websites.

To the guy that wanted to change your ip address to flag on craigslist: if the posting you wish to remove is a bad one, then others will flag it too, and it will get removed eventually. That's how the system works.

Your external IP is set by your ISP and you cannot change it.

Until recently I used putty and ssh tunnel, but as you know ssh can not do UDP traffic tunneling that is why I've been searching for other solutions for myself and I found it. I recommend you SmartHide by Arovax - one click of a mouse and no settings headache 🙂 You push a button and a TCP/UDP tunnel is created and you don't need to set up the software. All the programs work through the tunnel, p2p, email, web surfing, skype, adult sites, online games, and casinos.

I read all your posts, but I am not very familiar with some of the commands.

I want to change my IP address because I live in Mexico and I am forbidden to acess a lot of American sites. I don't think my purpose is illegal (maybe theirs is! 🤣 )

Could you tell me about that NETSH thing? I also saw a way with a RUN command (ipconfig release) that changes it, but I am not sure. I work in a small network (2 computers) through a modem. I use Win XP and browse with Firefox

Thank you very much

You don't just need to change your IP -- you need to change it to a different location than your own. The only real way to do this is through the use of proxy services.

Thanks a lot. I find that IP address scary! THAT shouldn't be permitted. I knew the IP was not enough to appear in a different country,

I have installed Tor, but it is disabled, I would need time to learn how to use it, as well as yours. Which I don't now, and I feel very frustrated.

hi all , how can i change only my ip address without changing the gateway using netsh..

I thought you can change your ip if you are hooked into the modum?

"Modem" you mean? of course no!

Answered
12 years ago
Updated
8 months ago

I type in cmd but get an error: De service is niet gestart. Do you know what the problem is? 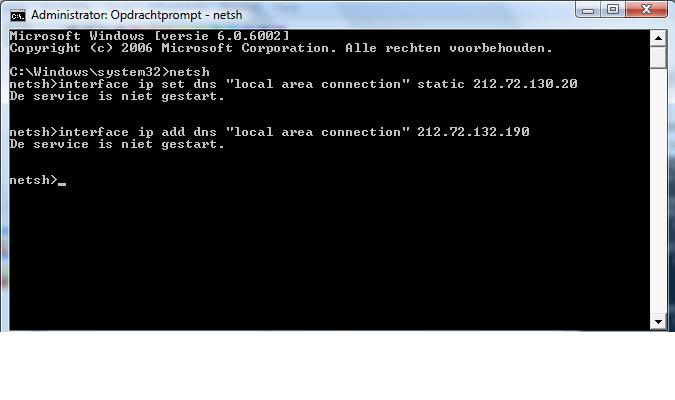 You're going to get a new ip if your isp uses dhcp dynamic allocation: well at least for me

Mine does and i can get a new ip without trying too hard, All i do is go to windows network settings and put a different ip and save it then go back and click "obtain address automatically and within a minute i have a new ip

Answered
12 years ago
Updated
8 months ago

You can also get OPEN DNS. see yah..

Cmd is great, but I recommend you to use some tool for that. I'm using Maxidix IP Switcher for example, it is the simplest way for fast switching between IP settings. I that the other program Wifi Suite can switch settings even automatically when you connecting to wireless network.