This tutorial will introduce you to some of the basic concepts of Python, including syntax, data types, and language constructs. No previous experience with Python is assumed.

Python is a free and open-source language and can be downloaded for your specific platform at the following URL:

For detailed instructions on installing Python on your particular platform, consult the Python documentation.

Once you have Python installed, you should be able to bring up a command prompt (Windows) or a terminal (UNIX/Linux) and type python to start the Python interpreter:

The interpreter will evaluate any expression you type in. Alternatively, you may specify a Python script (.py) to be executed:

Any basic text editor will work fine for writing Python code, although you may want to use an editor with syntax highlighting support for the language, as well as one with the option to indent using spaces rather than tabs. 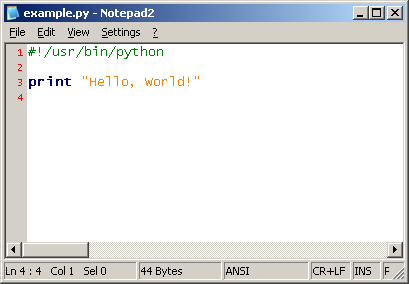 In Python, blocks of code are distinguished by indentation. This is quite different than C-like languages such as PHP and Javascript, which use curly braces ("{" and "}") to signify the beginning and end of a block of code, respectively. This may feel strange at first, but you'll get used to it, and it can make Python code significantly easier to read.

Here's an example of Python code containing nested code blocks. Notice how the indentation of each line determines which block it belongs to:

Comments
Python has two different comment styles that can be used.

The pound symbol style (#) is used to signify a comment that extends through to the end of the line.

The slash-star style (/ ... /) specifies a comment that begins with a slash-star (/) and ends at the first star-slash (/). Comments of this style can span multiple lines.

Conditionals and Loops
Conditional blocks (if-statements) and loops begin with their respective keywords, an open-parenthesis, the conditions, a closing-parenthesis, and a colon:

You've already seen some variables used in this tutorial. To define a variable, simple write the name of the variable and set it equal to some value:

Python's basic data types include those found in most other languages: integers, floating point numbers, booleans, and strings.

Classes
Python is an object-oriented language and thus allows the creation of new types (classes). A class is defined with the class keyword, followed by the name of the class and a colon:

At this point you should have a basic enough understanding of Python to begin writing a few simple scripts. Here are a few sample problems to solve using Python: