I recently implemented a feature on an iPhone wallpaper site that makes it possible for visitors to see a wallpaper both by itself, and then when their mouse hovers over the thumbnail, view it with the overlay that an iPhone generally displays over the background. 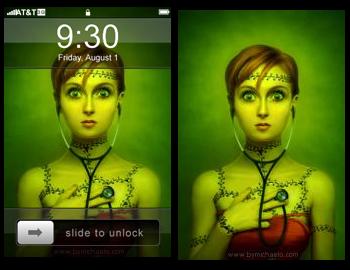 There is one issue with this method, it will require CSS hacks for PNG transparency to work properly in IE6. Since those hacks are outside the scope of this tutorial, I'll leave it up to you to implement them if you require IE6 support. Chances are that if you need them, you're already going to have the hacks implemented for another feature already anyways. 🙂

When I set out to make this work I wanted a few things.

I wanted to keep the semantic meaning of the <a> and <img> elements so search engines know what the things are.

The reason I wanted to use CSS instead of JS didn't have anything to do with graceful degradation of the effect if that's what you're thinking. It had everything to do with simplicity, it's just easier to do it with CSS than it would be with JS since there's no animation involved.

The HTML was fairly simple. I only needed to add a class and style attribute to my <a> element, and wrap the <img> in a <span>. Since I'm using an XHTML-transitional DOCTYPE the align attribute is valid on an <img> and is used in my case to pull the alignment of the next element up level with the top of the <img>.

The CSS is fairly simple as well.

The <a> and <span> elements are given a block display so that they can be assigned a background image. The <img> element is given width, height, and uses visibility instead of display so that the parent elements (<a>, <span>) do not collapse around it.

When all goes well, the <img> element functions like a piece of glass that holds a pair of rubber bands open.

By default, both the <span> and <img> element have visibility of hidden so that the background for the <a> element, which happens to be pointing to the same image the <img> element points to, will show through what is essentially functioning like two pieces of glass.

Here is a visualization of how things stack up. 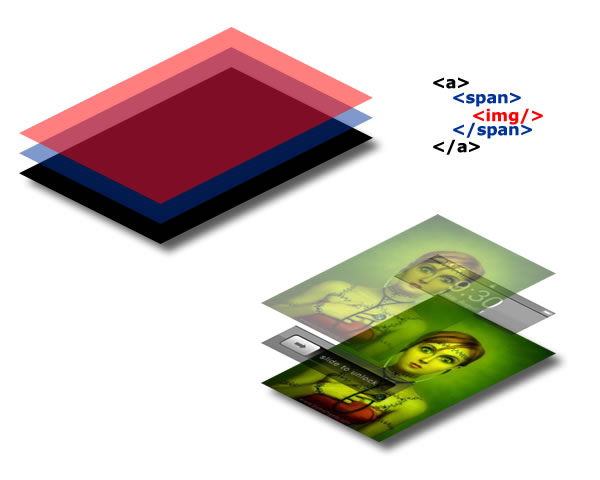 When everything is supported the <img> element is always hidden and simply functions like a piece of glass all the time. If for some reason there is no CSS support, the <img> element just displays the image instead of letting the <a> background show through. Since they're the same image, it looks the same either way.

When the mouse hovers over the link, the visibility of the <span> element which uses the iPhone overlay as a background is made visible. Since the overlay is a semi-transparent PNG it allows the wallpaper image to show through like it would on an iPhone.

There's probably a hundred ways to achieve this effect, but for me this has been the easiest to implement on an existing site.